From Hchkswiki
Jump to: navigation, search

The HKS magnets have been manufactured at Mitsubishi Electric Co. and the field mapping is under way. In the following sections, the design principle and the performance of the magnets are described.

HDC1 and HDC2 were fully commissioned during E01-011 run in 2005. After the HKS runs, those chambers were used for the G0 experiment. Now they are now supplied voltage to check if anything is changed after E01-011. 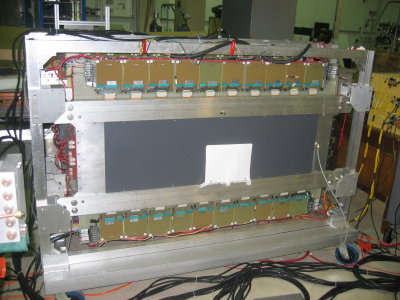 The following document generalize the preliminary "How-To" of both HKS and HES drift chamber. Media:HKS_HES DC.pdf

Except for HTF1Y. No modification will be made. HTF1X, 2X are fully commissioned in E01-011.

It was found that 1~6% of events are lost due to the space between HTF1Y counters. In order to recover the loss, we renew the design of light guide and make them staggered configuration. Light guides are designed and now fabricated in Japan. HTF1Y with new lightguides will be assembled in January 2009. 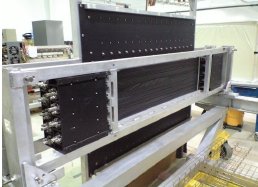 An aerogel Čerenkov detector is used for pion suppression.