From PolWiki
Jump to: navigation, search

Here we show the offsets in two equivalent ways. Both methods were used on 3/3 event mode runs. In the first method each event with hits in all three planes are used to find a track. Using this track an angle is calculated between the each pair of planes. If there were no offsets between the planes these angles would all be zero. Based on the distribution of angles it was found that angles > 1 deg correspond to an offset of (-2,-2,0) for planes 1,2 and 3 and angles < 1 correspond to an offset of (-1,-2,0). For plane 1 the strips closer to the beam were found to have offset of -1 while strips closer to the Compton edge were found to have an offset of -2. After applying these offsets, the tracks were recalculated and the new angles were found to be zero and hit distributions were found to overlap exactly for each plane. The plots for this analysis are shown in slides offset.pdf which is shown in elog 210.

The second method involved looking at the difference between the strip# for each pair of planes. These results confirmed the observations that the offsets were (-1,-2,0) or (-2,2,0). We also plot the strip # difference for each pair of planes vs the third plane. All plots were made for laser ON and laser OFF events and clearly show that the strips closer to the Compton edge tend to have offset of -2 and strips closer to the beam tend to have offset of -1. These plots are shown in elog 216.

If one plane was inclined with respect to the other, an offset of 20 micron (space between strips) would lead to a 1 strip offset in the hit spectra. An inclination of 3.6 degrees would result in a 20 micron shift around strip number 25 (5 mm from the detector edge). The carrier boards are 60mm long therefore an inclination of 3.6 deg would result in one end of the detector plane being raised by 3.8 mm with respect to the other end That seems too large of an inclination given that the spacing between planes is only 10 mm. 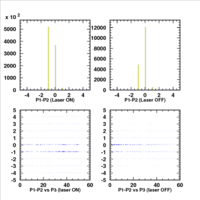 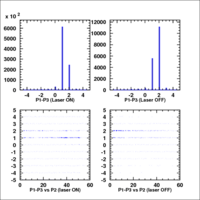 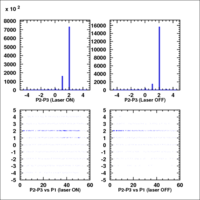